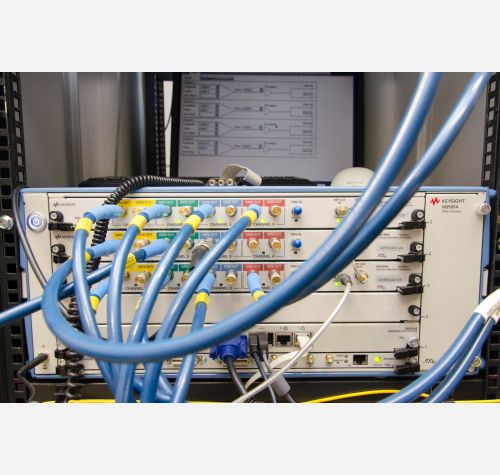 UNLOC benefits from the latest technology to increase bandwidth

The UCL Optical Networks Group (ONG) has further improved its lab capabilities by investing in the most advanced technology. The latest addition solidifies the ONG lab as a world-leading university-based optical communications lab.

UNLOC are using this new technology to research new methods to defy an impending capacity exhaust in fibre bandwidth which provides the connectivity that we rely on in modern society.

These three modules are synchronised together to allow experiments across 12 channels, this is the best that is currently possible. As a result, UNLOC researchers using the ONG lab are able to work with over 120 GHz combined transmitter bandwidth, potentially the greatest offering globally. By using optical technologies to achieve such an ultra-broad bandwidth, which is 3 times larger than bandwidth offered by the arbitrary waveform generator individually, UNLOC researchers can overcome the limit of high speed electronics.

The new ultra-broad band transmitter combined with the ultra-broadband receiver which has already been widely used by the ONG researchers, enables digital signal processing on both ends of the transmission link. This means that compensation of impairments along the link, such as noise, are optimised and the reach of the transmission is significantly increased.

The capability of this new equipment has not yet been fully explored, but the UNLOC programme are working towards achieving next generation transmissions with a net bit rate of over 1Tb/s. This would be almost 50,000 times greater than the average speed of a UK broadband connection of 24 megabits per second (Mb/s), which is the current speed defining “superfast” broadband.