Establishing world-class connectivity throughout the UK 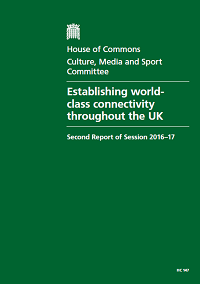 A key function of the Department for Culture, Media and Sport is to manage the delivery of the superfast broadband programme and improve digital connectivity. In March 2015, the Coalition Government published a Digital Communications Infrastructure Strategy setting out the infrastructure they believed the United Kingdom needed to support a world-leading digital economy over the next 10 to 15 years. The challenge now is extending broadband coverage to all.

Some summary points include: