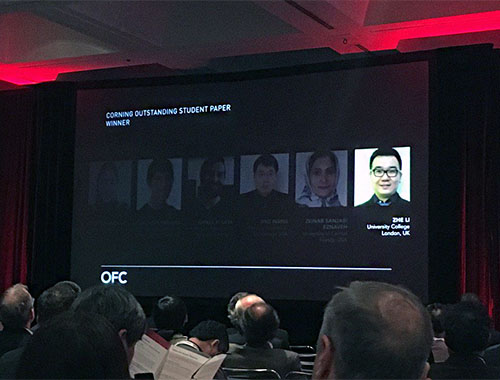 The Corning Outstanding Student Paper is awarded to a student presenting at OFC who has demonstrated innovation, research excellence and presentation abilities in optical communications.

Zhe had two papers accepted to OFC 2017, both focusing on reducing complexity to speed up inter-city data connections. You can read more about Zhe's recent work in our round-up of UNLOC contributions to OFC 2017. Zhe credits UNLOC in both of his OFC papers, one of which was top scored paper, "Tu3I.4 - 112 Gb/s/λ WDM Direct-Detection Nyquist-SCM Transmission at 3.15 (b/s)/Hz Over 240 km SSMF Enabled by Novel Beating Interference Compensation".