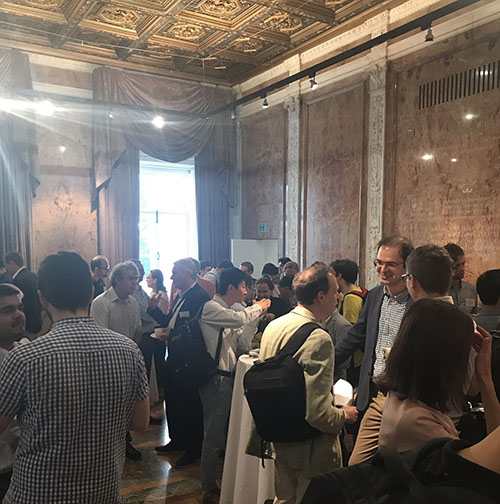 On Friday 2 June 2017, we hosted Beyond state-of-the-art optical communications alongside The Photonics Hyperhighway programme.

> Watch all the talks from the day on YouTube

The event aimed to bring together these two leading UK research programmes to celebrate the progress made in this area of research and to highlight the new and existing challenges we have yet to overcome.

It was a full house at The Royal Society with a broad audience from across industry, academia, funding bodies and the media.

The programme included speakers from both EPSRC-funded programmes, as well as external speakers from industry and academia. There were three main sessions: understanding and overcoming optical nonlinearities; wideband solutions and new network concepts.

The day started with introductions from the UNLOC and Hyperhighway programme leaders, Prof Polina Bayvel and Prof David Payne. Both directors focused on the current strength as well as the impressive history of photonics and optical network in the UK.

Prof David Richardson (University of Southampton) kicked off the session on optical nonlinearities, stating that the main challenge we face is the unrelenting demand for increased data in our networks. Prof Richardson introduced Southampton’s work on hollowcore fibre; UNLOC has worked closely with Southampton on antiresonant hollowcore fibre characterisation.

UNLOC Co-Director, Prof Sergei Turitsyn (University of Aston) followed on by presenting UNLOC’s achievements in this area and asking if nonlinearity really sets the limit for optical fibre capacity.

Prof Erik Agrell (Chalmers University of Technology) rounded off the first session with a discussion on why fibre capacity is difficult to calculate.

Dr Jayanta Sahu then detailed the University of Southampton’s work on amplifiers. Dr Sahu presented results from experiments using different combinations of doping elements for use in wideband networks.

Dr Seb Savory (University of Cambridge) spoke about UNLOC’s network topology research. Dr Savory discussed topologies of different scales from the very large Google network to the relatively small scale Deutsche Telekom network. Dr Savory explained that we can actually use the nonlinear regime to improve networks by re-optimising the power in each channel; something that isn’t possible in the linear regime. As we push networks towards their maximum throughput (by re-optimising power and increasing the modulation format), the load is better distributed across the network.

Prof Dimitra Simeonidou, (University of Bristol) spoke about The Photonics Hyperhighway work to drive new fibre technology development from a network prospective. Prof Simeonidou stressed the significance of this work in cloud computing, the internet of things and smart cities, including 5G networks.

Dr Benn Thomsen, who recently moved to Microsoft from UNLOC, topped off the third session with his talk about optics in the cloud. Dr Thomsen discussed opportunities for Microsoft, Amazon, Google etc. as they progress to be more than just software companies. The final step is to incorporate optics fully into data centres.