UNLOC staff and students brought the excitement of fibre optics to school children from across London on Tuesday, when they participated in the Big Bang Fair at Alexandra Palace. 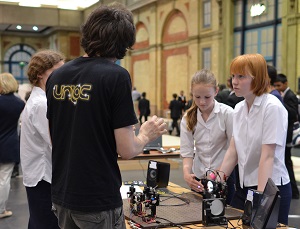 At the UNLOC stand, pupils had the chance to practise their DJ skills as they experimented with transmitting music over optical fibre, and were also able to learn about the role that fibre plays in bringing the internet to their homes.

Over 5000 pupils attended the one-day event, which aimed to inspire young people about the opportunites available to them through studying science and engineering.