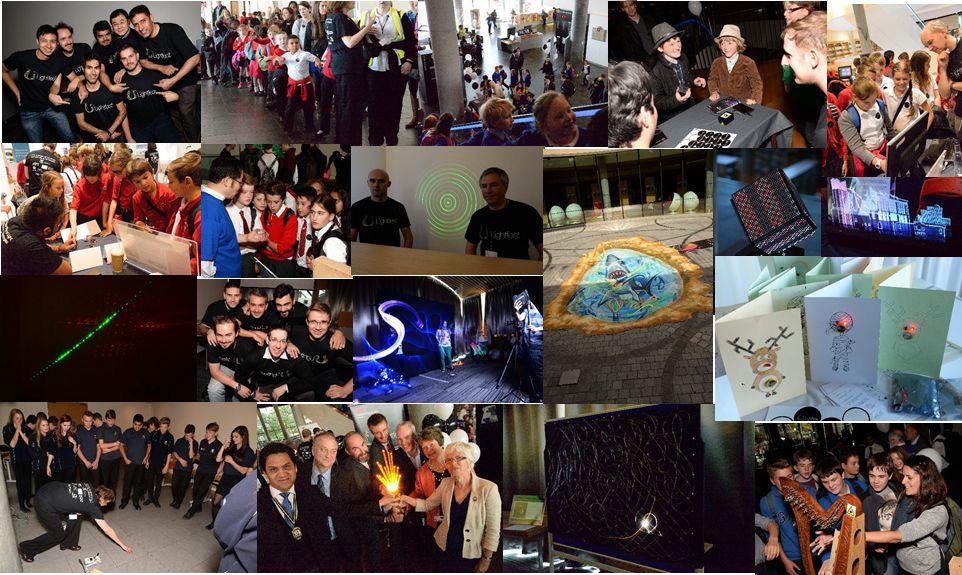 UNLOC's lead partner Aston Institute of Photonic Technologies joined forces with the Library of Birmingham and the Flatpack Film Festival to present the first ever Lightfest Exhibition to the citizens of the greater Birmingham area.

Lightfest took place on Sept 25 this year and was part of the 2015 European Researchers' Night - a continent wide initiative funded by the Marie Sklodowska Curie action of the Horizon 2020 programme to bring science closer to the general public, increase awareness of current research and its impact on citizen’s daily life, and encourage young people to embark on research careers. Coinciding with the International Year of Light, the event focused on the science of light and light-based technologies. The day was packed with a variety of activities including public lectures, demostrations and workshops. Visitors could listen to UNLOC investigator Prof. Andrew Ellis discuss the fundamental role of light in transferring 99% of all data floating on the internet via fibre cables, jump onto a workshops and learn now light can be used to measure tiny distances on the order of a human hair and then top up this experiences with a demo urging everyone to try their musical skills on a laser harp. UNLOC members from the Aston Institute of Photonic Technologies were involved in building and presenting several of the demos used during the Lightfest Exhibition including a display of how a message can travel through a fibre and a musical laser harp, which could be played by blocking laser beams triggering various notes on a synthesizer.

The exhibition was visited by more that 12000 people from the greater Birmingham area. The Aston Institute of Photonic Technologies used the momentum generated by Lightfest to establish ongoing partnerships with local schools to equip teachers with tools and skills that can help encourage your people to pursue careers in STEM fields.

More about the Lightfest Exhibition including videos of the public lectures can be found on the official website of the event.